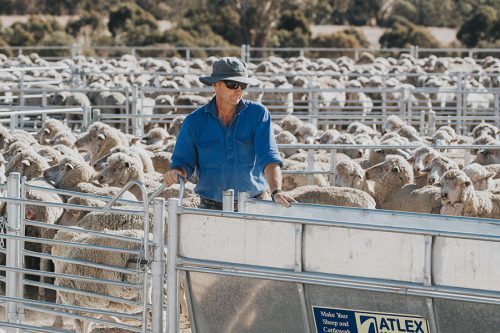 Atlex stockyards has grown with technology in the 30 years the company has utilised computer aided design, using innovation and precision to make your stockwork quicker, easier and safer.

The technology and animal psychology driven stockyard company three years ago into the world of three-dimensional (3D) visualisations.

It was July 1989, five years after Atlex Stockyards was established when founder and principal designer Ian Crafter was first introduced to the computer program Autosketch and the company has grown exponentially since then.

“I saw a video demonstration on how a piano was able to be moved down a hallway and pivoted through a doorway to the side. The program worked out how wide the hallway had to be. I saw straight away how I could use this in stockyard design, I walked away that day having purchased Autosketch. I was amazed,” he said.

This is quite remarkable considering large PC computers in 1989 were vastly different to the slim, compact laptop computers we use everyday.

Atlex computer aided stockyard designs have evolved to include the use of the robotic theodolite in 2004. A tool which allows millimeter precision in surveying existing structures including sheds, ramps, let out pens, trees; plus staking out the new stockyard design for digging holes.

With unrivaled industry experience, Atlex was the first to develop the On-Property Design in 1989. Atlex are all about the design getting the design correct for the next 50 years and making stockwork quicker easier and safer.

This is a process where Ian Crafter visits farmer’s properties throughout Western Australia and using the robotic theodolite, take a survey of the site with milllimetre- precision.

Taking in consideration client thoughts and wishes and Atlex experience, the collaborative process allows the production of a precise two-dimensional (2D) draft design.

“As they say…it’s better to make a mistake on paper than in practice. We spent hours using Ian and his design program to come up with yards that are exactly what we need. Each site is different so has different parameters; there is certainly not a one size fits all in the yard building game.” Twynam Cunningham from Cranbrook,

“The on-property design is probably the best value for money in the whole deal.”

The designs from Atlex have been peer-reviewed by Assoc. Professor Temple Grandin, a world authority on animal psychology at the University of Colorado.

Once the design is finalized, it is pegged out using the robotic theodolite which enables pinpoint millimeter precision of the design on site.

The option of a 3D visualisation of the draft design allows the client to see their design in perspective view. A huge benefit of being able see clearly how the design both fits in the site space but also how is all fits together.

Atlex continues to make the most of technology and animal psychology to develop your new stockyards, which are an investment for the next 50 to 70 years, to make your stockwork quicker, easier and safer.