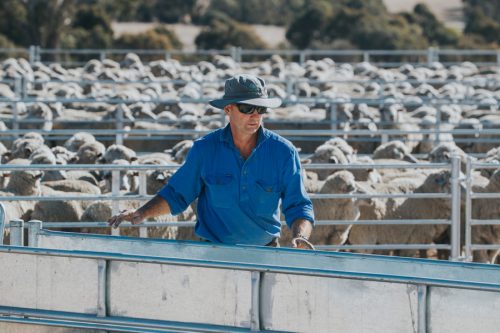 IT’S an exciting time to be a wool and meat producer with high demand and strong seasons driving up prices.

According to Atlex Stockyards principal stockyard designer Ian Crafter these strong conditions have seen a swing from cropping to sheep and driving a once-in-a-generation sheepyard infrastructure renaissance.

“Where traditionally we have seen 70 per cent grain and 30pc wool production, we are now seeing the tables turning with the resurgence in sheep,” said Mr Crafter, who has been designing stockyards since 1984, and servicing WA for the past 22 years.

“Not since 1990, just before the withdrawal of the wool floor price, has there been such a surge in improving sheepyard infrastructure.”

With his new yards, it’s now a one-man job for Mark Taylor, Kojonup.

The return on investment has been driven by a greater sophistication in design over the past 20-30 years, Mr Crafter said. “Our experience began to tell us that good yards confine and control the movement of sheep,” he said.

“A good system makes sheepwork quicker, easier and safer using minimal physical effort. “I remember all our family arguments used to start in the sheepyards and now all you need is one man and one dog!”

You need to make hay when the sun shines, according to Mark Taylor, Kojonup.

“With improved profitability in sheep, I thought I could justify a significantly better investment,” Mr Taylor conceded. “The investment over a 60 or 70-year life of the yards is not significant compared to what’s sitting in that machinery shed.

“Good businesses run really simply. “Taking the clutter out of our working life is one way of achieving that simplicity “The yards I previously had were constantly being propped up with bits of wire, with gates and with tech screws.

“This is quite common in Australia and I’d had enough. “The time I spend in my new yards has been significantly reduced because of the capacity of the throughput and the sheep flow so well.”

Smarter investment in sheep infrastructure is not only fueling today’s farmers, but also drawing the next generation back to an industry which has traditionally struggled to attract younger people.

“This is very much an intergenerational investment,” Mr Taylor said. “If it’s not made easy for generations to come, you can understand why people won’t be enticed to have a go.”

“In farm management, it’s critical to recognise when your staff or your facilities are starting to compromise the quality of your management decisions,” Mr Stretch said.
“Our sheepyards had been doing that for at least five years.

Digby Stretch of Kojonup, WA with his daughter Emily.

“The lift our new well-designed Atlex yards have given us as a productive farm has been huge.”

Safety was central to Mr Stretch’s decision to invest in his sheep infrastructure. “When you have an old set of yards and you’re sitting on tenterhooks and hoping that no people or animals hurt themselves, it’s not a nice feeling as a manager, a friend, or a human being.

“We sign off as a country that we do animal welfare really well and this is part of it.

“It’s been  extraordinary to see the lift in everyone’s enthusiasm for sheepwork after having got rid of the old yards,” Mr Stretch said.